The Museum of Graciosa, Graciosa Island

The Museum of Graciosa is located in the town and county of Santa Cruz Graciosa in Graciosa Island in the Azores.

It is currently housed in the former bulk of the building site once used for storage of grain and wine produced on the island. 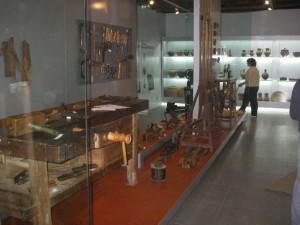 The collection seeks to recreate historical, ethnographic and cultural events on the island, particularly those most directly connected to the everyday life of the people.

Plays a typical house of the island with its traditional architectural elements, they are represented a wine cellar with its vessels from the mill to the presses. Implements intended for land tilling has its representation in the various instruments related to traditional crafts, according to the professions. Thus they are represented carpentry, cooperage, and pottery, for example.

Attached museum there is a garden where exposed sev

eral artillery systems from the various fortifications that defended the island, placed in strategic points of the coast, mostly missing today.

The museum further comprises two cores, an allusive whaling housed in a former tent of whaling boats at the port of Santa Cruz and the other a typical windmill of the island, located in the village of sources.