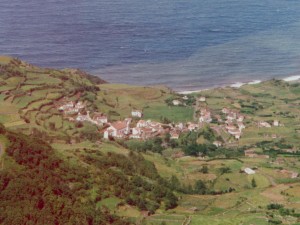 You must visit further north, are the towns of Fajãzinha and Faja Grande, a good starting point for hikers with impressive waterfalls, such as the Cascade of Ribeira Grande.

The Lagoa Funda, in the Southwest of the capital, is a pond of the Azores located in the southern sector of the central highlands of the island of Flores, municipality of Lajes das Flores, Flores Island, Azores.

It is a pond altitude included in the set of Sete Lagoas that formed seven craters caused by volcanic eruptions that contributed to the current geology of Flowers.

It lies near the Lagoa Rasa. Following this comes from Ribeira Funda.

These seven “are volcanic explosion craters of the type related to maar hidromagmáticas eruptions in the central highlands of the island of Flores.

The White Caldeira is surrounded by a tuff ring, and with the exception of Caldeira Seca, all craters have lagoon, about 108 m depth in the case of the Black boiler “.