Terceira also referred to as the “Ilha Lilás” (the “lilac” or “violet” island), is an island in the Azores archipelago, in the middle of the North Atlantic Ocean. It is one of the larger islands of the archipelago, with a population of 56,000 inhabitants in an area of approximately 396.75 km². It is the location of the historical capital of the archipelago, the Azores’ oldest city and UNESCO Heritage Site (Angra do Heroísmo), the seat of the judicial system (Supreme Court), main base of the Azores Air Zone Command (Commando da Zona Aérea dos Açores) Base Aérea nº 4 and to a United States Air Force detachment.

A small number of Hypogea (earthen structures carved into rocks, that were used for burials) were discovered on the island of Terceira, indicating a history of settlement that may date back 2000 years, and alluding to a presence on the island before the Portuguese. 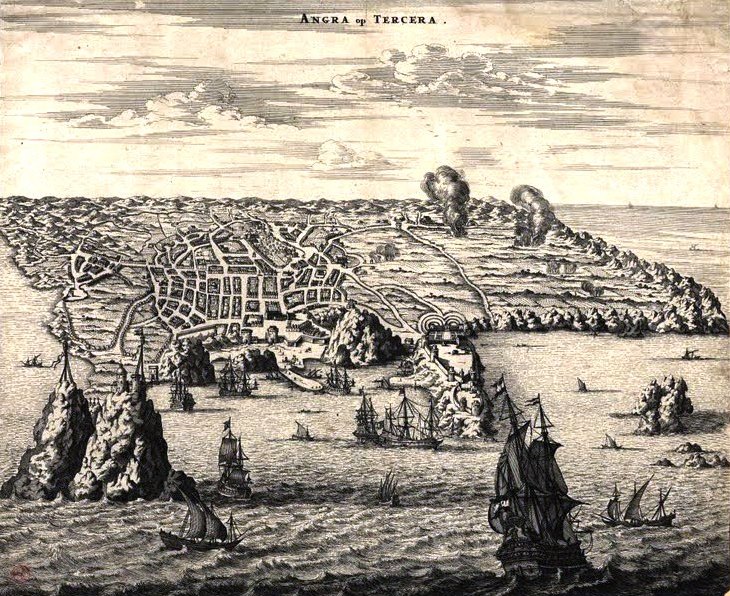 Historically, there has been uncertainty in the date and the discoverer associated with the islands of the Azores. Nautical charts before the “official” discovery identified islands in the Atlantic Ocean as far back as 1325, when a chart by Angelino Dalorto identified “Bracile” west of Ireland, and later one by Angelino Dulcert which identifies the Canaries, and Madeira, along with mysterious islands denominated as “Capraria” (whom some historians suggest were São Miguel and Santa Maria). Legends also persisted of Atlantis, Sete Cidades (Kingdoms of the Seven Cities), the Terras of São Brandão, theIlhas Aofortunadas (The Fortunate Islands), the Ilha da Brasil (the Island of Brasil), Antília, the Ilhas Azuis (Blue Islands), the Terra dos Bacalhaus (Land of Codfish), and charts appeared between 1351 and 1439 of several groupings of islands with various names. The first association between the modern island of Terceira and these stories, was that of the island of Brasil; it first appears as Insula de Brasil in the Venetian map of Andrea Bianco (1436), attached to one of the larger islands of a group of islands in the Atlantic.

In 1439 the first official discovery document appeared attributing the discovery of the Formigas islets, to Gonçalo Velho Cabral.[5] There is an indication that Terceira may have been discovered by Vicente de Lagos, the Velho Cabral’s pilot, on 1 January 1445: the first documents after this period started appearing with a third island in the Azorean archipelago, referred to as the Ilha de Jesus Cristo (Island of Jesus Christ), and later, Ilha de Jesus Cristo da Terceira. Gaspar Frutuoso, a chronicler and humanist, would later rationalize about the island’s first name, noting that:

Regardless, it was only a temporary name, as the colloquial Terceira (meaning “third” in Portuguese, as in “the third island” or “third to be discovered”) was used more often to describe the island.

The colonization of the island began by decree of Infante D. Henrique (dated 21 March 1450), and placed the island in the administrative hands of the Flem Jácome de Bruges. Its first settler was Fernão d’Ulmo, a Flem or Frenchman, who later abandoned his plot, for unknown reasons. Bruges, although a Flemish nobleman continued to bring families and settlers from Flanders and northern Portuguese (João Coelho, from Guimarães; João da Ponte, from Aveiro; João Bernardes, from Lagos; João Leonarde, from Vieira; and Gonçalo Anes da Fonseca, from Porto), adventurers, as well as animals and provisions, disembarking in the area of Porto Judeu or Pesqueiro dos Meninos, near Ribeira Seca (depending on sources). Gaspar Frutuoso also affirmed that:

…that ancient settlers of the island of Terceira, that were the first to settle in a band to the north, where they call Quatro Ribeiras, where now the parish of Santa Beatriz is located, and where the first church existed on the island, but were few settlers remained due to difficult access and bad port.

The first settlement occurred in Quatro Ribeiras, in the locality of Portalegre, where a small chapel was raised for the invocation of Santa Ana. Bruges made return trips to Flanders for new settlers to his colony. On one of his trips to Madeira he conscripted Diogo de Teive and assigned him as his Lieutenant and Overseer for the island of Terceira. A few years later, Brugues moved his residence to Praia, began construction on the Matriz Church in 1456, and administered the Captaincy of the island from this location (around 1460), until he mysteriously disappeared in 1474, on another of his trips between the colony and the continent.[6] Following his disappearance, the Infanta D. Beatriz, in the name of her son the Infante D. Diogo (who inherited the islands of Terceira and Graciosa following the death D. Fernando, the adopted son of the Infante D. Henrique) divided the island of Terceira into two captaincies: Angra (which was given to João Vaz Corte Real) and Praia (which was given to Álvaro Martins Homem). Apart from the Portuguese and Flemish settlers, colonists from Madeira, many slaves from Africa, new Christians and Jews populated the island at this time, developing new commercial ventures including wheat (exported during the 15th century throughout the empire), sugar-cane, woad (for the dye industry) and woods (principally for the naval construction industries). This development would continue until the end of the 19th century, with the introduction of new products, including tea, tobacco and pineapple.

During the 1580 Dynastic Crisis, the Azores was the only portion of the Portuguese overseas empire to resist the Spanish until the summer of 1583. Philip II of Spain had offered an amnesty if the Azores surrender, but his messenger met with a very hostile reception at Angra do Heroísmo (escaping to São Miguel, which had presented its allegiance to the King of Spain). Following the Battle of Ponta Delgada, where Don Álvaro de Bazán, 1st Marquis of Santa Cruz defeated the Anglo-French supporters of D. António (the pretender to the Portuguese throne) off the coast of São Miguel, the Marquis concentrated his forces at a less defended beach 10 kilometres (6.2 mi) from Angra do Heroísmo. With a fleet to ninety-six ships and 9,500 men (as well as a garrison of 2,000 on Sao Miguel) the Marquis was able to defeat the forces of D. António after one day’s fighting. Although French and English soldiers on the island were allowed to retire unharmed, D. Antonio and a handful of his supporters were lucky to escape with their lives.

With the acclamation of John IV of Portugal, the Azores applauded the restoration of independence from the Iberian Union. This was not lost on the Spanish settlers in Angra do Heroísmo, who had become a privileged class during the Union, and which made it difficult for them to remain after 1642, when Portuguese sovereignty was restored.

In 1766, the reorganization of system of Captaincies was undertaken, resulting in one Captain-General, with his seat in Angra do Heroísmo for the Azores.

In 1810, a number of journalists and others considered to favor the French, including the industrialist Jácome Ratton, were exiled to the island for a period.

Having embraced the cause of constitutionalism, the local Terceirenses established a Junta Provisória in the name of Queen Maria II of Portugal in 1828. At the outbreak of hostilities between Miguelistas (supporters of the absolute monarchy of Miguel I and the Liberals (supporters of constitutional monarchy installed by King John VI of Portugal) at the Battle of Praia da Vitória in 1829. In a decree, issued on 15 March 1830, Angra was named as Portuguese capital by these constitutional forces, who protected and supported exiled Liberals who supported the rights of Queen Maria II of Portugal, whose rights were usurped by D. Miguel. In 1832, Pedro II (former King and regent of Queen Maria) arrived in the Azores to form a government-in-opposition to the absolutionist regime in Lisbon, presided by the Marques of Palmela, and supported by Azoreans Mouzinho da Silveira and Almeida Garrett that developed many important reforms.